Gintaras topped off an incredible regular season in the CBL U14 division by beating the Tower Hamlets Ravens to complete a ‘perfect’ 10-0 record and the undisputed number 1 seed as they head into the playoffs.

Led by the dynamic duo of Alonas Peciulis (24 points) and Tadas Girnius (15 points), Gintaras were able to negate the anticipated threat of Tower Hamlets prodigy Andre Parker (10 points).  Parker has been a handful all season for opponents and the main reason why Tower Hamlets came into the game at 7-2 with a shot at claiming the number 3 seed heading into the post-season, if there were able to pull off the upset.  However Peciulis made it quite clear from the first quarter, that he would not be denied in completing an outstanding regular season which has seen him emerge as the leading candidate for league MVP, as he led the charge on both offense and defense.

Taking on the challenge of guarding the lengthy Parker himself, Peculius often frustrated the Tower Hamlets big man with consistent ball pressure and good positional defense that limited Parker from ever establishing good position in the paint, where he has been effective all season.  Offensively, Peculius put on a show, hitting 3 long-range 3-pointers in the first half, to go along with 3 driving lay ups to take Gintaras in 29-11 at the half.

In the second half Tadas Girnius, perhaps Gintaras’ unsung hero this season, put Tower Hamlets away for good with his focused intensity and ‘refuse to lose’ attitude, which ultimately pushed the Lithuanian Express out of reach for any late game Tower Hamlets heroics.

Tower Hamlets coach Carlos Borrego gave credit to Gintaras in defeat: “They played well and were ready for this game and they deserved to win.  Also that number 22 (Peciulis)…he’s really, really good”.

Gintaras will now look to crown their achievements thus far with a division championship in the post-season playoffs where they will match up against Harrow Blackhawks in the first round of the playoffs. 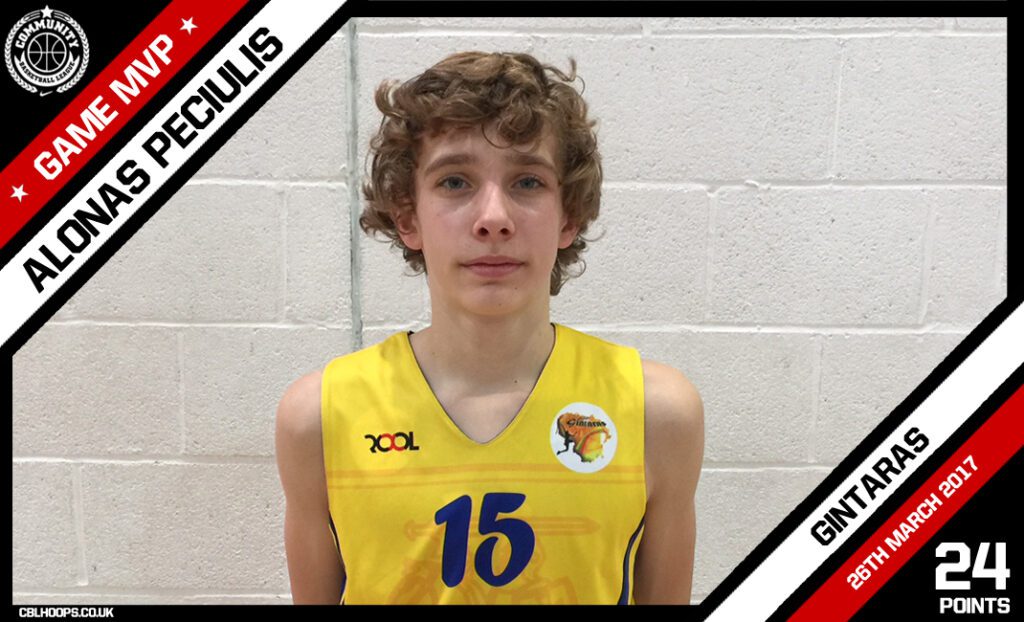